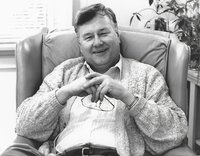 Dr. Robert W. Davis passed away peacefully on November 25 at the age of 85. He is survived by his wife Mary Ann, daughters Molly and Suzanne, and son John.His sons Robert and Joel, and daughter Mary Christine, predeceased him. Dr. Davis practiced clinical psychology for over 55 years, with a focus on individual and couples psychotherapy.Above all, he loved his family and patients and visited with many clients, colleagues, family members, and friends up until his final days. Bob was known for his wit and humor, compassion with his patients, and loving support for his family.Always a rabid Oregon Ducks football fan, he also loved Notre Dame and would root for Oregon State when they were not playing Oregon.His passion for travel around Oregon, Canada, and Great Britain was infectious and he and his wife Mary Ann travelled to the Oregon coast many times each year to enjoy the beach, where good weather always seemed to follow them. He read too many books to count and maintained a library of professional and popular books that numbered over 5,000 at one time.His favorites were history, biography, psychology, and religious historical books. His cursive handwriting was legendary and he hand-wrote multiple letters every week, maintaining an active correspondence with colleagues and friends until the end. He was also an avid collector of Canadian stamps, and loved classical and opera music. In his diverse and varied career, Dr. Davis served as a psychotherapist, college professor and president, chief of mental health for Clackamas County, psychological examiner for the Oregon Parole Board, and many other roles. In the 1970’s he founded and was the first President of the Oregon Graduate School for Professional Psychology, which eventually merged with Pacific University.He also served as professor and instructor at Pacific University, Lewis and Clark College, Brooklyn College, Portland State, Oregon State, and taught professional courses regularly throughout Oregon and the country.He published dozens of professional writings in addition to his classroom work. Dr. Davis was born November 1, 1934 in Portland, Oregon, and lived most of his childhood in Marion County, in and around Salem and Mt. Angel, where he attended Mt. Angel Preparatory.During his middle school years he also attended boarding school at Vancouver College, Vancouver, B.C. Canada. After graduating from Mt. Angel, Bob attended Seattle University and earned a B.A. in Psychology, then worked for Boeing for a time before attaining a Masters (1961) and Doctorate (1964) in Clinical Psychology from the University of Portland.His family always found irony in that his doctoral studies focused on geriatrics, but he refused to be considered old even to the very end, keeping an active professional and family life and never fading away into the sunset. During college and afterwards he served in the Army and was a reservist for many years, spending days hiking with his platoon around Fort Lewis in Washington State, attaining the rank of Captain.After his graduate studies, he worked in Oregon and then in New York as a professor, before returning to Oregon permanently, his first love.In the 1990’s, he obtained a post-Doctorate certificate in Jungian analysis and was active in Jungian psychology groups for many years. Professionally, Dr. Davis always focused on one-on-one psychotherapy while working and serving in many clinical settings.He served at many institutions in Oregon, at Lincoln Institute for Psychotherapy in New York City, at Morningside Hospital in Portland, Oregon, at Clackamas County and Marion County Corrections, in Oregon’s state prisons, with the Social Security Disability administration, with the Veteran’s Administration, with the Oregon Board of Psychology. Dr. Davis published dozens of professional papers and articles, and served as an editor of many publications. He received many professional accolades, including admission as a Fellow of the American Academy of Clinical Psychology and listed in the Who’s Who In America.He was a member of many professional associations, including the Pacific Northwest Society of Jungian Analysts, International Association for Analytical Psychologists, Association for the Advancement of Psychology, Oregon Psychological Association, and American Psychological Association. Despite his active professional roles, he was a devoted family man and loved his wife Mary Ann and his children and grandchildren greatly.He relished travel and conversations with Mary Ann and together they would savor good hotel rooms, meals, and travel experiences, not to mention the latest book or article. Dr. Davis is greatly missed by his family, friends, and colleagues. His presence was always felt, and is already missed.