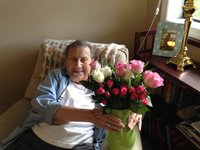 Elsie lived 97 (and-a-half!) long and full years, and had a “really good ride.”She is survived by her four children (Pat, David, Dennis, and Russell); two grandchildren; and two great-grandchildren. Elsie (Pokorny) was born and grew up in the suburbs of Chicago. She met Frank Ruzicka after high school, and they married in 1941.She waited at home while he was in Europe fighting in WWII, and after the war they welcomed 4 children (one girl, three boys) over the next 20 years. They stayed married to each other for 68 years; Frank passed in 2009. Elsie was so much more than a “homemaker.”She was the glue that held the family together. She kept us all organized, planned the vacations and travel trips, mediated disputes among the siblings, gave us each a shoulder to cry on or a boost of confidence when we needed it.She studied astrology, and was a student of the energies of the universe. All of us kids had our own private discussions with her about what the planets were doing, what aspects were in our favor or going to be challenging, whether or not the time was looking right for big moves (finances, job, life!). Many of her friends enjoyed deep discussions with her about life issues and how they were affected by the principles of astrology. Elsie was also a business woman who spent her summers in northern Wisconsin, managing a family business of summer vacation cabin rentals on a pristine fresh-water lake. She raised her kids to enjoy the outdoors, and the Northwoods, andto understand responsibility and hard work through tasks like bailing boats, cleaning cabins, keeping up the grounds, and running errands (for everyone!).But there was also fun, in planning special activities for the guests, and ultimately enjoying, for years to come, all the enduring relationships that were formed during those summers. After Elsie’s mother (Gram Pokorny) died, she was able to buy a condo in Kona Hawaii.She and Frank had found “paradise” through a few vacation trips to Hawaii, and now were lucky enough to spend the entire winters in Kona, far from the Wisconsin snow! And oh did she (they) have good times in Kona! Swimming, sun bathing, parties by the pool.Many, many people got the “Mele Kalikimaka” cards from Hawaii every Christmas! When traveling back and forth finally became too difficult for Elsie, she settled in Portland, Oregon, in assisted living facilities close to her daughter Pat. Elsie always enjoyed traveling, both in the U.S. and internationally. She was part of a foursome of women friends who periodically left their spouses behind and went off on long weekends, or driving trips, or special trips (a “wine” cruise on the Rhine River).Elsie also traveled with Frank on planned trips with their Wisconsin friends: to Ireland, the Black Forest in Europe, Branson Missouri.There were several memorable Elder Hostel adventures (in Alaska, Mexico, the Colorado Rockies), and a few cruises with the Hennings and the Frischmanns.Elsie sure did get around in her almost 98 years! Elsie was physically small in stature but had a lively and vibrant spirit. She would always flash you a smile or give you a witty remark.(“I love you, don’t run away from home”). She had her “go-to” jokes (“How did you sleep last night, Els”?“With my eyes closed”). She played cards, and bingo, and loved going out to lunch and having “coffee and” with her friends (and adopted daughters), right up until the end. Those of you who knew Elsie will know that she is not gone—she is floating around in the universe keeping tabs on all of us she loved.And those of us who love her will know that she will always be “right here” as long as we carry her memory and love in our hearts. Oh Elsie…. Oh mom… we will miss you, so-o-o much, Sweetie Pie. We will never run away from home.