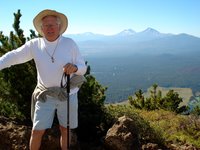 Warren Campbell Gilfillan was born in Seattle, Washington in 1922. He loved the outdoors and spent much of his youth hunting, fishing and backpacking in Washington’s backcountry. He served in the Army Air Corps in World War II, then earned a BS in Wildlife Management from Washington State University. After working for both the Washington and California game departments, Gilfillan and his wife Doreen moved to Oregon in 1953, where he served as a district executive for the Boy Scouts of America. He spent five years as the organization’s Director of Camping, before transitioning to the Oregon Fish Commission as information-education officer. Inspired by earlier programs in southern Oregon and California, Oregon’s regional “Outdoor School” launched in 1966 with Gilfillan as its leader. The public school program for sixth graders emphasized a “hands-on” approach to understanding the natural sciences. Each class would spend a week at a local camp learning the basics of environmental science and how water, soil, plants and animals interact to form a larger natural system. The ground-breaking and popular program grew and shrank with the vicissitudes of public education funding throughout the next five decades, but always remained a top priority for “Mr. Gil.” He believed that the sustainability of Oregon’s quality of life would depend on its citizens having a fundamental understanding of nature’s interconnected processes. In 1969, Gilfillan, earned a MS from the University of Oregon, developing his own curriculum focused on the new field of “environmental education.” In 1981, he initiated the Willamette Harbor Tour program to teach eighth graders about Portland’s working river. He retired in 1983, after leading the program for 17 years. In retirement, he enjoyed travel throughout Europe, Russia, north Africa, Australia, China, central America as well as remote areas of the Himalayan and Karakoram mountain ranges, the North American Artic, Siberia and Tibet. He also remained an avid mountaineer and Mazama Club member, summitting Mount Adams at age 80 and South Sister at 83. He spent much of his later years practicing wood carving in the Northwest Coast indigenous style, an art form for which he had a life-long admiration. One of his last visits to outdoor school in 2014 was covered by the Portland Tribune (https://pamplinmedia.com/sl/240188-102220-oldtimers-return-to-outdoor-school). In 2012, Gilfillan was profiled on OPB’s Oregon Field Guide program (https://watch.opb.org/video/oregon-field-guide-outdoor-school/) Gilfillan was delighted in 2016 when Oregon voters approved landmark legislation to fund “Outdoor School For All.” The first year of the state-wide program served more than 30,000 students in all 36 of Oregon’s counties. Since launching in 1966, more than 750,000 fifth and sixth graders have attended Oregon’s outdoor schools, for which Gilfillan’s program was the model. He is survived by his wife of 69 years Doreen, on Ian (Nancy), daughter Jule, grandsons Matthew (Laura) and Kevin (Lindsey) and three great-grandchildren (Andrew, Aria and Asher Campbell Gilfillan). He credited his long life to living in the outdoors and quitting cigarettes at age 12. Memorial Service: Willamette National Cemetery, Portland, OR Tuesday, July 14th at 10:00 AM. Due to restrictions related to COVID-19, the ceremony will be immediate family only. In lieu of flowers, please send donations to: Friends of Outdoor School (friendsofoutdoorschool.org) OPB (opb.org) The Mazamas (mazamas.org) Lelooska Foundation (lelooska.org)